The Sinking of the Lusitania

In early 1915, submarines began to be used in the German maritime campaign against the British. Initially, they were only used to attack naval ships but soon they also attacked merchant vessels. Usually this happened in accordance with the Cruiser Rules, which stated that “a warship…may not sink or render incapable of navigation a merchant vessel without having first placed passengers, crew and ship’s papers in a place of safety”. Even with these rules in place it was quite clear that ships, which sailed in the seas around the British isles were at risk of being attacked by German submarines. The German embassy in Washington D.C. placed a warning advertisement in American newspapers telling passengers travelling to Great Britain that they did so at their own risk. Some passengers were concerned about the warning, but the majority did not assume there was a serious threat. Survivors of the disaster have mentioned that the threat of being attacked was taken light-heartedly and was even the subject of jokes on board the ship.

On 7 May 1915, the Lusitania had almost reached its destination of Liverpool when she crossed in front of the German submarine U-20, captained by Kapitänleutnant Walther Schwieger. Schwieger gave the command to fire a torpedo, which struck the Lusitania on the starboard side. A second explosion occurred moments later and rocked the boat further. The ship tilted to one side, meaning that lifeboats on this side became completely unusable and only the six remaining lifeboats could successfully be launched. Some passengers jumped overboard and clung onto rafts, while others were offered refuge when the collapsible lifeboats floated out of the sinking ship. After only 18 minutes, the Lusitania had completely sunk. Of the 1,961 verified passengers aboard the ship, only 764 survived. The sinking of a passenger liner without warning caused an international uproar, and the loss of 128 American citizens is widely considered to be one of the main reasons that the United States eventually declared war on Germany in 1917.

There is no actual footage of the sinking of the ship but re-enactments were shot after the tragic event. The 1918 film, “The Sinking of the Lusitania”, from the archives of the Cinémathèque Royale de Belgique, was made by American animator Winsor McCay in the style of a documentary and aimed to inspire an anti-German sentiment by describing the incident as “the most violent cruelty that was ever perpetrated upon an unsuspecting and innocent people” and as "the crime that shocked Humanity".

Similarly, “Lest We Forget”, a 1918 British film from the Imperial War Museum’s archive, stresses the fact that the ship was unarmed and refers to the Germans as Huns who must be stopped. The film also shows an excerpt which appears to be from a German newspaper and reads, “With joyful pride we contemplate this latest deed of our navy”. Here the British are not only condemning the German navy for sinking the ship but portraying the whole nation as cruel and merciless enemies.

Interestingly, there is an American film in the collection of the Deutsche Kinemathek which portrays “the German” quite differently. In “The False Faces”, released some time between 1918-1919, one of the characters is supposed to be the captain of the German U Boat that fired the torpedo at the RMS Lusitania. He is seen to be having visions of those who perished on the ship and in the surrounding waters and seems to be driven mad with sorrow and shame for what he did. 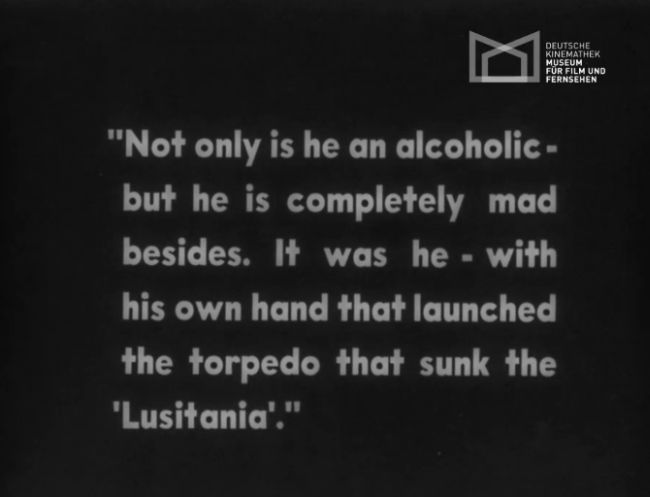 The Danish Film Institute holds a short film, which shows the Lusitania probably in 1914, a few months before its loss. The film documents the voyage of the vessel from its departure from Liverpool to its landing in New York City at pier 54 with the silhouette of Manhattan looming in the fog. 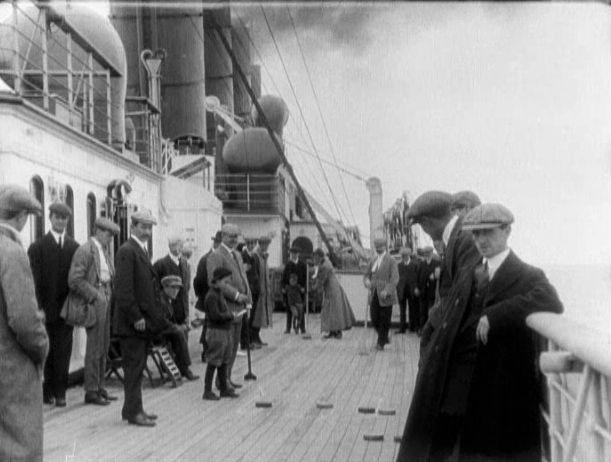 Until today, the Sinking of the Lusitania is considered a controversial event and there are several conspiracy theories surrounding it. Some reject the British Admiralty’s official version of events. It is widely accepted that there were two explosions on the RMS Lusitania. Walther Schwieger’s eyewitness account stated this as well as countless others, who managed to escape from the ship onto the lifeboats. This, coupled with the fact that the ship took only 18 minutes to sink, has led historians to suggest that the ship was carrying undeclared military ammunition that created an explosion. To this day the British government have never confirmed the presence of ammunition on the ship, despite the fact that 4 million American-made bullets were found in and around the shipwreck in 2008. Instead it is still considered a violation of maritime law that the German U Boat fired a torpedo at a passenger cruiser. Another theory suggests that the Lusitania was deliberately placed into danger by the British Admiralty that supposedly knew but failed to warn the crew that the ocean liner was in the way of a German U-boat. Instead, so some believe, they were hoping that the Lusitania would be attacked and that the sinking would encourage the United States to join the war against the Germans alongside the British. Whether the conspiracy theories bear some truth or not, the sinking of the RMS Lusitania naturally became a very effective propaganda tool for the United States and Great Britain against Germany.